You are here: Home / Awareness / Responding Vs. Reacting – A Key To Personal Growth 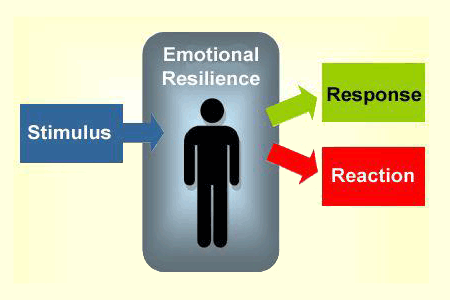 Responding vs. Reacting in Life

Between stimulus and response there is a space. In that space is our power to choose our response. In our response lies our growth and our freedom.

The act of responding requires one to look at the circumstance, identify the problem or situation, hear what is happening and reflect. That reflection can be for a moment, five seconds, one hour, two days or longer. The time frame doesn’t matter. What matters is that you stopped and put an effort to think and suspended judgment. It is a conscious act and shows that you are willing to listen or observe. This “gap” between the circumstance and your behavior is what contributes to gaining a sense of control in your life. Once a person can identify that in responding they actually have a choice in the manner, he/she will start to realize that they are able to make better decisions. The key is that pause. If the situation requires an immediate action, then just take a deep breath first. This alone can help one gain a semblance of control and make one choose an alternative statement or action that can make a big difference in an outcome of a situation.

Reacting on other hand is the absence of this time gap. It is an immediate behavioral response and it is usually based upon emotions and not intellect. Reacting to events, reacting to comments from other people or reacting to sudden situations in an immediate way, can create unpredictable outcomes. When intellect or logic is bypassed for emotional vengeance, then there is a greater chance that irrationality will take over. Usually when you react you are unprepared and overwhelmed in feeling (i.e. anger, frustration, lust etc.) that your intention becomes strictly one-sided. As a person has an immediate reaction it is unlikely that the person has even considered the other person’s point of view or understanding. Immediately reacting can also mean that the person is not thinking about future consequences. The person is only identifying with his/her immediate emotions and using the emotions as a point of reference.

Now, there are obviously certain times and places for reacting. Humans have this innate biological mechanism for a reason. If you were being attacked for instance, you would want to immediately react for survival. If you’re driving the car and a dog jumps out in front of you, you will usually swerve to avoid hitting the dog without much thought. The problem arises when a person can only identify him/herself with emotions and not mindful reasoning and the need to react becomes a constant type of response mechanism. In the extreme sense a person who only uses reaction over responding can become emotionally overwhelmed thus producing hysterical or illogical behavior. Numerous and ongoing problems can arise for those having no impulse control or the ability to self regulate emotions.

The benefit of understanding and identifying both these types of behavior in ourselves is immense for personal growth.

For one, this knowledge shows you that you have options and more control over circumstances than you realize. The effect of going through life in a reactive mode ultimately becomes draining, difficult and can even bring about isolation. In addition, constant reacting to life puts you in the ‘victim’ role, a role that makes life a struggle and unfulfilling.

Making an effort to respond on other hand helps you establish control. Responding takes a conscious effort and builds mind control. Responding looks at others actions and consequences and provides a more holistic approach to behavior. Responding, not reacting will get you closer to what you want.

This site uses Akismet to reduce spam. Learn how your comment data is processed.